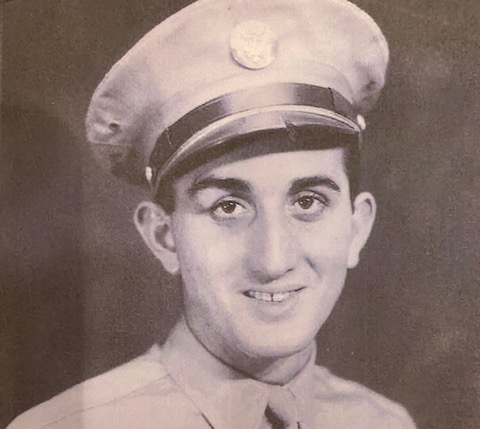 HOWARD MISKELLY, Staff Sgt., US Army and Member of “The Greatest Generation”

When Howard Miskelly, accompanied by his father, reported for the draft at age 18, his father was informed that Howard was eligible for a six-month deferment.  His father replied, “We don’t want no deferment, do we, Bud?”  Those few words spoke volumes about the wisdom, courage, character and faith shown by the Miskelly family, even while fearing that their son was headed most certainly toward harm’s way.  And thus began a young man’s journey into the perilous unknown of World War II.

At Howard’s departure for service in 1943, he carried with him a steel-covered pocket Bible given to him by his aunt, on which was inscribed the words “May this keep you safe from harm.” That Bible went through combat with him, and to this day remains a treasured possession. Howard’s 102nd Infantry Division fought in Belgium, Holland and Germany. His division saw 932 members killed, 2,668 wounded, and 150 who later died as a result of their injuries. In a recent newspaper article Howard spoke of the hardships endured as the soldiers walked and fought through central Europe.

Howard received many honors throughout his military career, including two Bronze Stars. In 2018, on a memorable Veterans Day, he received from President Donald Trump a military jacket and a letter of appreciation for his service. Howard was one of the young men of the “The Greatest Generation” who came of age successfully fighting a war to save our world and secure our freedoms. As Tom Brokaw wrote in his book The Greatest Generation, “This generation was united not only by a common purpose but by common values—duty, honor, courage, service, love of family and country . . ..” Howard and all veterans, especially those of World War II, are held in the highest esteem and are due all praise for their selfless sacrifices.

After the war’s end, Howard returned home to Tippah County in 1946 and married his high school sweetheart, Ann Street of Ripley. He put himself through Mississippi State University and began his civilian career as a teacher in Pontotoc. He later opened a clothing store in Okolona, where he and Ann raised their three boys and two girls. Eventually those three boys began the successful business of Miskelly Furniture in the Jackson area. Their two daughters live in West Point. Howard and Ann, who will soon celebrate their 75th wedding anniversary, now make their home in West Point as well.

Howard was appointed by the governor to serve on the Veterans Affairs Board of Mississippi, and while in that capacity worked toward the best interests of all Mississippi veterans.

Howard’s extraordinary life has been chronicled in a book written by Dr. Mark Wyatt entitled The Longest Shadow:  The Life and Legacy of Howard L. Miskelly. The Friends of Mississippi Veterans organization is pleased to honor and salute Howard Miskelly, Staff Sgt., US Army, for his service.  Along with our gratitude for his service to America, we acknowledge also his outstanding sense of duty and service to his community and state.

“Some people live an entire lifetime and wonder if they have ever made a difference.  A veteran doesn’t have that problem.”—President Ronald Reagan